“My struggles with weight began when I was 3, after my parents got married and my mom got a promotion. Her job became more stressful, home-cooked meals became rare, and healthy living wasn’t a priority. My mom, my dad, and I all began to put on weight. We tried cooking at home more and working out as a family, but time never allowed. I was bullied throughout elementary school and in the 5th grade, could no longer shop in the kid’s section for clothes. The impact of my weight worsened in middle school.

I longed to play school sports, but I was scared of going to the doctor to get a physical and the inevitable conversation about my weight gain. I began playing for recreation leagues instead. As I continued to gain weight, my fears of trying out for the school team grew.

Instead of going to the doctor, I researched diets online for hours. Nothing worked. By the time I was 15, I weighed 247 pounds at 5 ft. 9 in. I remember the day I stepped on the scale and spent the next couple of hours crying in my room. Every day after I told myself, “Today is the day …” For a while it worked, but some days I would eat so little that by the time I came home, I was starving and would binge eat. But I kept trying. I thought if I starved myself and exercised more, I would see a change on the scale.

The first time I ran an entire mile, it took me 13 minutes and 43 seconds. I will never forget that number. I fell in love with working out. But, my temptations regarding food persisted. I was so tired of constantly fighting for little success. Eventually,  I turned to low-carb diets.

In my last semester of high school, I lost 43 pounds.I was elated. Finally, something worked. Everybody told me how amazing I looked. I fit into smaller clothes. I  shopped for my senior prom dress in stores instead of online. But, truth is, I was miserable. I had not done my research. I was eating roughly 600-700 calories a day, and burning 400 calories via fasted cardio. Some days it became a game. Could I burn more calories than I had eaten today? I was constantly tired and my priorities shifted from friends to calorie intake and cardio. The worst part? I thought I had finally done something right, and society encouraged my unhealthy behavior because it made me thinner.

My saving grace was working at the Student Recreation Center during my sophomore year of college. I finally had a community that supported me and fitness goals in a healthy way. They gave me confidence in the gym that I had never experienced before. My friend, Allison, introduced me to weightlifting, and I fell in love. For once in my life, I felt strong, and not just physically. I finally felt like I was worth more than a number on the scale. I finally understood that food fuels my body, and isn’t something to fear. I prioritized friendships and living my life, rather than dropping numbers on a scale. I finally felt like I was not alone.

I am now 21 years old, and I still have a BMI that states I am overweight, but I am happy.”

I was recently asked by a PhD student to share my story and thoughts on living with obesity. As I was sharing the story above, I found that I stigmatize my own experiences with obesity. I  emphasize the diet and exercise portions of my story, and leave out other factors that contributed to my weight. Some of these factors include genetics and stress from family issues.

I think I knew I was struggling with obesity, but I never admitted it. I would not have referred to myself as a person living with obesity. Society, media, and even healthcare providers would continuously encourage diet and exercise, as if I had not thought of that. It wasn’t until I attended the Obesity Action Coalition’s  Your Weight Matters Convention that I started to understand and grasp what living with obesity looks like and the complexity behind it.

The  image below reveals  potential contributors to obesity that are not related to an individual’s willpower. There is a disconnect between the story I tell and the factors I experienced. I have identified four factors that contributed to my weight, but I only emphasize two: diet and exercise. There is a common, stigmatized phrase that society throws around when referring to weight loss, “Eat less, move more.” It’s reiterated in the media and consumes our minds, that even I tend to blame myself for my weight struggles. Sometimes this image makes me feel powerless, as if I don’t have control over my health. However, there are steps we as individuals can take towards prioritizing our health. 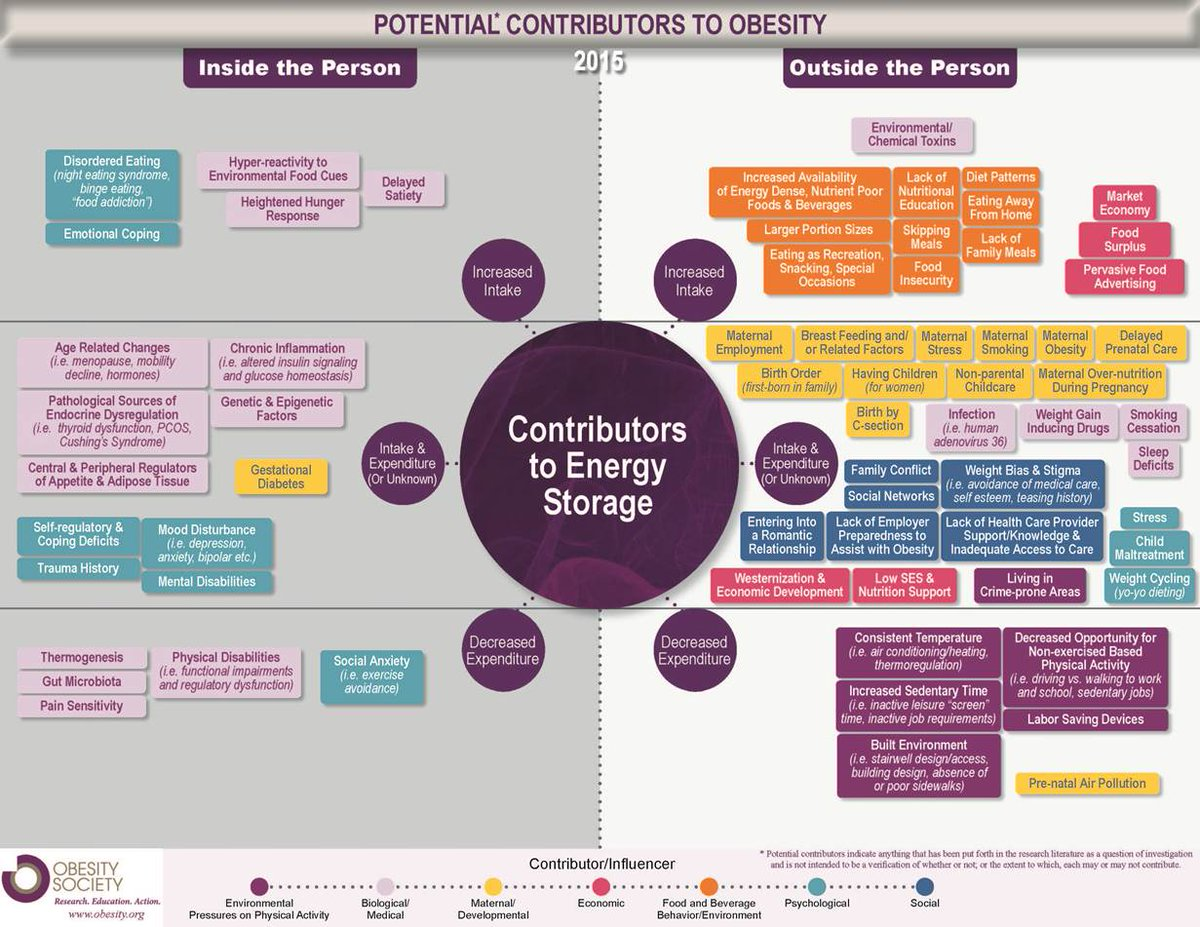 One of the first steps we can take towards healthy living, is not blaming ourselves. When we blame ourselves, we damage our self-confidence,  our mental health and our self efficacy. Healthy living isn’t just physical; it’s mental, emotional, social, financial, and physical. There are so many areas to balance in our lives, and the bottom line is that it is  hard to find a balance. It’s a balance I didn’t find until 16 years after my journey with obesity first began.

The second step is to not give up! I can not tell you how defeated I felt every time I tried a fad diet, and it didn’t work.I believed the eat less, move more narrative and when that didn’t work, I was disappointed However, I’m rather stubborn and never stopped trying. Eventually, I found that balance, which came from meeting other individuals who struggled with their weight as well.

The third step is community. I would still be lost and lonely without the community I have built through the gym, the OAC, and OCEANS. Talking with like-minded individuals motivates me when I feel like I have hit a plateau in my journey. If you are a teen seeking out a community, I encourage you to reach out to oceanslifestyles@gmail.com and if you are an adult, I encourage you to look into https://www.obesityaction.org/.

Wherever you are on your journey, please know you are not alone.